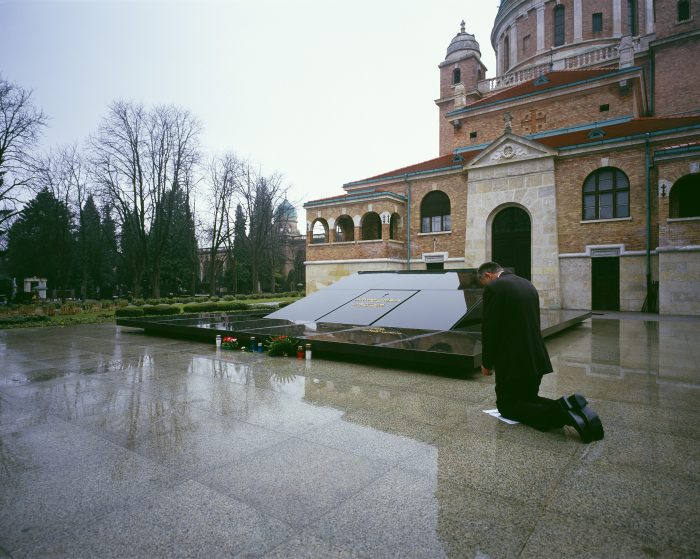 In the manner of a pilgrim, the artist has staged a photographic performance at the Mirogoj Cemetery in Zagreb, on the grave of the first Croatian president, Franjo Tuđman. The artist decided to continue his series of performances in the way he has done them in K9 Compassion (2004) in New York, before cult urban toponyms, and in K9 Compassion+ (2005) before parliaments in centres of international political power: Washington, London, Brussels, Moscow, and Beijing. Like before, the performance includes the ritual of kneeling in a humble posture; the artist always wears the same black suit, a white shirt, and a white handkerchief beneath his knees.

With his performance on the grave of Franjo Tuđman, a politician and a statesman, whose role in the recent Croatian history is marked by, to say the least, contradictions, the artist opens some possible questions that have yet to be answered. In his previous performances from the K9 series, he faced a major dimension of cultural and social and political power, whose symbolism is equalled with the architecture of particular buildings. At this occasion the artist performs a ritual of humility on the architecture of the president’s grave in relation 1:1, in this way primarily testing the symbolic power of the deceased, but indirectly also the state of the nation.