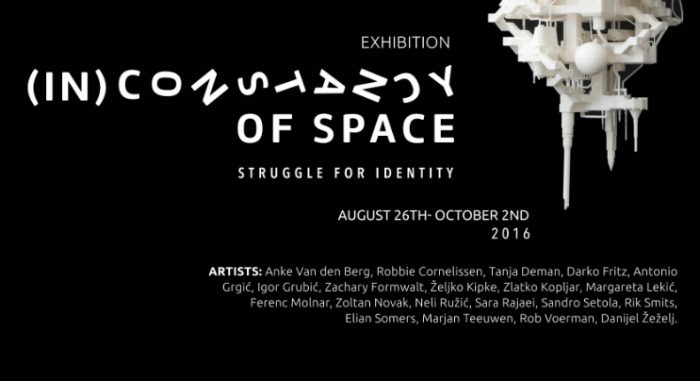 The (In)constancy of Space- Struggle for Identity is a group multimedia exhibition which includes works by eminent Dutch and Croatian Contemporary visual artists dealing with the concept of man made space and its (in)constancy, not only in physical sense but also on sociological, symbolical, psychological and ideological level.

In the era of the globalization and mobile society, architecture has been established as a significant catalysts for questioning the identity of Contemporary man, in this case by juxtaposing the artworks by Dutch artists with the ones from Croatia who interpret identical and always topical issues – particularly nowadays with the rising migration caused either by work, lifestyles or war. The Netherlands and Croatia, two different countries in Europe, make an interesting complementary duo. The Netherlands is a country with a longstanding and one of the oldest market economies in the world, while Croatia is in the phase of post-socialist transitional capitalism. Also, these two countries are geographically and culturally different.

Through visual artists’ different views of architecture, space and its inconstancy, the exhibition deals with the issue of how globalization processes suppress national or/and individual identities, creating a “world marked with similarities” (Adorno), and it examines how human memory is affected by constantly changing (urban) space in Contemporary society. By juxtaposing different artists from historically two different political systems, the objective is to bring together both national and globalizing aspects of human identity. At the same time, (In)constancy of Space- Struggle for Identity is the opportunity for Amsterdam audience to see the largest sample of Contemporary Croatian Art so far.

In Amsterdam, artist talks, guided tours, lectures and screenings will take place not only in Arti et Amicitiae but also at Amsterdam University and De Nieuwe Anita.